Walking the acequias of the Alpujarra 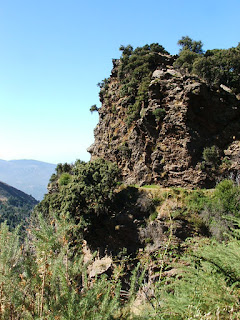 Many of us who live in the countryside areas around the Sierra Nevada rely upon the acequia system to bring us much needed water. For those not in the know, acequias are man-made water channels which run throughout the area bringing water to lower agricultural land They are often essential, allowing us to grow fruit and veg., fill swimming pools (perhaps illegally) shower or even wash the car.

Thought to have been fully developed by the Moors when they ruled the area, the system probably reaches further back into history. It seems obvious that digging channels to route water to where it was most needed must have gone on for millennia in order to make the most of what is a precious resource. The system has spread across the whole of the region with hundreds of channels creating a massive irrigation system that feeds the whole of the area. On my hillside alone there are four major acequias channels. The Acequia Alta which ultimately feeds my cortijo, runs directly from the Rio Lanjaron at about 1,400m and traverses the hillside before it finishes above the Tablate gorge about whole 10km from its start. En route, sluices allow the water to be managed and fed down a network of smaller and smaller channels before ultimately watering my lettuce. 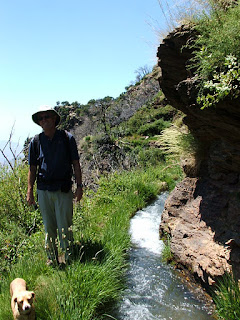 When walking in the region most of us will have come across acequias. Often with a path alongside, they can provide relatively easy walking routes along steep hillsides and river valleys reaching into the mountain ranges of the area. Whilst providing easy graded walks, they sometimes have short steep sections where the channel itself will be sent down rock outcrops in order to change the level at which it runs. Sometimes however they give much more dramatic walking as they pass through rather than down an outcrop. If you do come across these sections it seems incredible that the original builders had the skill to create these parts of the system. I must admit I actually seek out some of the more dramatic bits and have found many during my exploration of the area.

Some of the best are actually on the Acequia Alta where about 2km from the river the acequia clings to high cliffs above a vertical drop of about 50m. These sections are unfenced and if crossed when the water is flowing are breathtaking. Another dramatic section is found in the Rio Chillar gorge near Nerja. Here the acequia cuts through cliffs high on the east side of the valley. The ‘’path’’ is about a foot wide and runs around the cliffs as the water channel itself runs through on a narrow tunnel. Even though these sections are fenced they still need a good head for heights.
Perhaps one the most used routes is that through the Monachil Gorge. Here though, you may not know it, the channel is covered for most of its length and the acequia takes you through dramatic natural rock scenery.
No comments: 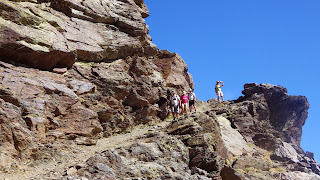 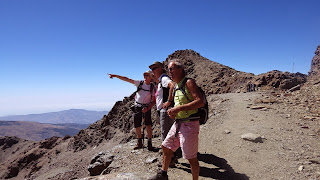 One of the more remarkable features of the Sierra Nevada range is the road that traverses the main ridge at around 3,000m. The road, an un surfaced dirt track, is now closed to all traffic, in summer however it is a clear route across the range and is popular with walkers, mountain bikers and occasionally horse riders. The history of the road dates back to 1916 when it was thought that it would be possible to create a link from Granada to the Alpujarra across the mountains. Construction began from the west side of the range and in 1932 a section of the road reached 3,100m on the side of Veleta, the peak high above Granada. This section of road, now surfaced in parts, is still on the ground and is used to service the ski tows and chair lifts on the mountainside. This particular section is also mentioned by Wikipedia as the highest surfaced road in Europe. During the civil war construction stopped and it wasn’t until the mid sixties when the link between Veleta and the south ridge of Mulhacen was opened. Once finished the route was open to all who wanted to venture across what would have been a very dramatic route which could be followed all the way from Granada to Capileira. This high sierra route was popular with drivers and remained open until the late nineties when the Parque Nacional was created and public access stopped. Remarkable as it was in its own right, as well as the road, it was also envisaged that a tunnel would be constructed below Veleta which would be used as a part of the route. Work on the tunnel was started from both sides of the St Juan ridge on the north side of the mountain. The work however was stopped by the onset of the civil war and never restarted after. The eastern entrance to the tunnel is still open and lies in the Coral de Veleta below the path known as the Verdon Superior. The ‘’tunnel’’ is about 50m deep and is often used as a bivouac site by mountaineers. When I first started walking in the Sierra Nevada I bought a copy of what was then the only English guide book to the area. That first edition of ‘’Walking in the Sierra Nevada’’ has a number of routes from the road and describes one route up Mulhacen which involved parking your car at 3,000m and walking the last 400m up the west ridge. It even describes a branch of the road that ran to a parking area on the south ridge itself which would require any intrepid “mountaineer” to walk a kilometre and ascend 75m before reaching the top!
No comments: