Snowshoeing in The Sierra Nevada

Snowshoeing in The Sierra Nevada

Spain’s Sierra Nevada can be an amazing place for snowshoeing during the winter months. Despite its southerly latitude and proximity to the Mediterranean Sea, its altitude can mean cold or very cold, and certainly cold enough for snow!

Most winters there is enough snow to give enough itineraries to keep the snowshoeing enthusiast sufficient days out to fill a weeks itinerary, though at some points each winter it can get a little “lean” and you’ll find yourself carrying your snowshoes over some sections.

A highlight is a snowshoe trip up to the Refugio Poqueira where you can spend a night (full hotel service) sitting beside the log fire soaking up the ambience. The snow often sits at around 1800m just above the village of Capileira 1300m.

Day 1.
Parking at a high point it is possible to snowshoe up through the forest to Hoya del Portillo 2150m which provides a good break point for lunch.

Continuing up through the forest towards Mirador Trevelez we then pick up the traversing path that leads gently through forest and then open hillsides to the Refugio Poqueira 2500m.

Day 2.
A couple of short steep climbs lead us to Alto del Chorrillo 2700m where we can pick up the broad ridge that leads back to Puerto Molino 2400m and Hoya del Portillo. Here we can take a different route back through the forest to where we started from.

This snowshoe trip is undoubtedly one of the finest in the Sierra Nevada and not to be missed from any itinerary so long as there is enough snow. The best time for this trip is usually February.

The Sierra Nevada like any mountains in winter can be cold and dangerous. Before setting out ensure that you know the weather forecast is good, be equipped for winter mountaineering and have the right skills including being able to navigate in snowy mountains. If in doubt, hire a qualified guide.

Sierra Nevada Guides can teach you the skills to walk safely or snowshoe in the mountains. 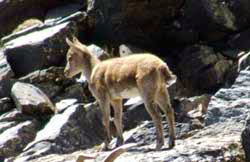 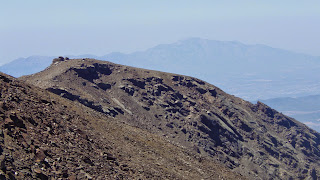 In a recent article in Granadas Ideal newspaper I read of a project based in the Rio Dilar area of the Sierra that was investigating the life cycle of Cabra de Montana, the wild mountain goats often seen across the whole region. Many of you who walk regularly in the area will have seen these ‘’mountain goats’’, normally running away into the distance. For those who haven’t these truly wild animals are about the size of a fallow deer, they are a tan colour with darker shoulders and haunches with the larger older animals having a pair large sweeping horns. Well suited to the mountain terrain where they are generally found they have short muscular legs and large soft hooves which are perfect for gripping steep rock faces. Generally browsers they live in areas of mixed scrub and broken ground in the lower mountains but I have seen them at 3,000m near the Caldera refuge on Mulhacen, on the edge of Lanjaron and also on the coast near Cerro Gordo. Often the only sign you have that they are in the area are large amounts of droppings on summits though you will often hear a sharp high pitched call as outlying individuals warn a larger group that you are approaching. The groups you see will either be made up of females with their young or males. The two groups do not generally mix apart from the breeding season in autumn. This is also the time when males fight for dominance of a herd with head butting contests. My first sighting of ‘’cabra’’ was about 10 years ago whilst descending the south ridge of Mulhacen. Needless to say seeing one of these animals for the first time was quite a shock particularly as it was quite a large male with a fantastic pair of horns. I have become accustomed to looking out for them but even so it’s often not until they move that I spot them as they are well camouflaged and blend into the backgrounds remarkably well. Whilst often called mountain goats these animals are actually a type of Ibex, Capra pyrenacia . At one time there were a total of four subspecies. One, a Portugese subspecies, died out in 1892. Shockingly the other, Capra pyrenaica pyrenaica, became extinct on the 6th January 2000. A remarkably specific date. However this was when the last known specimen of a subspecies peculiar to the Pyrenees died. A frightening example of how easily we can loose unique animals. The two remaining subspecies however seem to be doing well and at the moment at least appear to be growing in numbers with an estimated population across the Iberian Peninsula of about 50,000.
No comments: