Staying Safe in the Mountains


International Mountain Leaders have to complete Professional Development courses each year.  This year Mike, Jane and Steve from Sierra Nevada Guides were joined by Tom, another IML to spend 2 days in the high mountains looking at techniques for keeping our clients safe on the sometimes steep and rocky terrain we often find in the Sierra Nevada. Part of our reasoning for choosing the Sierra Nevada was not only the benefits learning in the terrain we regularly use, but also southern Spain’s usually warm sunny weather.


We had agreed with BAIML that Steve as a Mountain Instructor and Course Director for Mountain Leadership and Skills in Ireland, could facilitate the course, and this turned out to be a good decision, as he is a really great tutor. 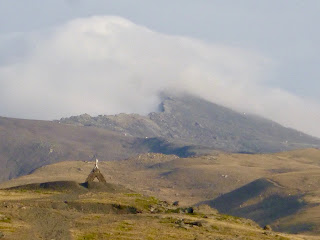 We used the University Albergue at 2500m as our base and met there on the first evening.  Tom had warned us the previous weekend that the weather forecast was not looking good.  We were a little sceptical of his suggestions that we might be faced with snow, as we had been above 3000m earlier that week walking in light clothes quite happily.  However we were prepared with warm clothes as we read about the ‘gota fría’ heading our way.  This is a cold front which sometimes sits over eastern Spain bringing unusually cold temperatures and often torrential rain.  Steve was driving down from near Murcia and found himself in the rain!

After an enjoyable evening catching up, we had an early start the next morning to plan the day.  We had booked places on the micro-bus which is operated by the National Park to take visitors up to 3000m and provides some interesting facts about the environment on the way. 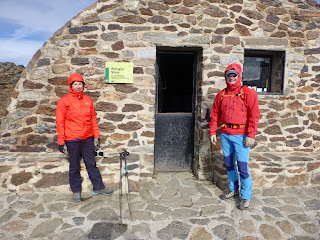 Our original plans had been to follow the easy scramble towards the summit of Veleta, talking about safety and route choice on the way. However the wind and cold meant this would have been unwise and unsafe so instead we took our ropes and warm clothes to the Carrihuela bivouac refuge at 3205m and used this as ‘basecamp’. 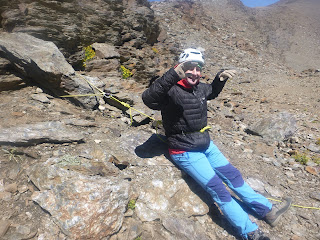 During the morning, Steve led us through some revision of knots, safe anchors and spotting.  It was good to remind ourselves of how much we already knew from both our Mountain Leader and International Mountain Leader courses as well as learning some new techniques.  For me one of the highlights was a really simple game for moving over steep ground, which involved holding a flat stone on the back of each hand whilst walking over the rocks at the back of the refuge. This meant you had to stand upright and hold you hands flat for balance (otherwise you will drop the stones) and it really worked!

After a break for lunch, we looked at belay techniques and using a rope to support a client who was lacking confidence in the terrain.  We then wandered around the rocky landscape underneath Veleta using both ropes and slings to support each other before returning to the bus.

It had been an excellent few hours, and we had managed to find shelter from the increasingly strong winds and almost freezing temperatures - southern Spain that day was sunny, but certainly not warm!!

During the early evening Tom and Steve spent an hour or so talking about photography. Tom is a really good photographer and Steve had just bought a new camera.  No CPD points for this session (though I am sure we could have made the justification for them), but some stunning photos of the sun setting over an increasingly stormy summit of Veleta were an added bonus.

The second day dawned but rather than sun, the tops were covered with quite a dusting of snow.  We debated our options and decided we more learning would take place by staying around the hostel as traveling any higher - this turned out to be a good move, as the driver of the bus returned after the early run saying there was too much ice and snow to be safe and he would not have taken us!

That morning we spend some time revising abseiling techniques (both the traditional and South African) and debating when each might be used. 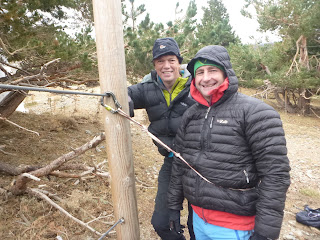 After warming coffee and cake in the hostel bar we made use of some nearby fencing (which is made of wooden poles and wire rope) to talk about keeping clients safe on fixed equipment, and when we might take people over what is called ‘the guides path’ - a short section of chain on a path near the old Sierra Nevada road.

The final hour we had some more practice with ropes and slings on the steep rocky paths behind the hostel.

We retreated to the warmth of the hostel bar for a final review and debrief before sending Steve off to do battle with the weather (the forecast for Murcia and Alicante was severe and we read the next day of some deaths on the roads due to flooding).

A really great 2 days, lots of learning, sharing and reviewing our practice.  We all agreed it would be good to do something similar the following year.