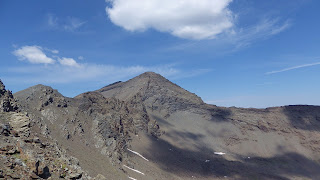 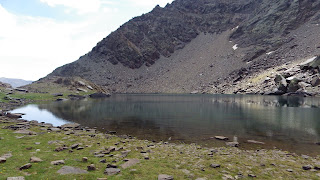 With low level temperatures hitting the high 30's it is still possible to get some cooler walks in in the main Sierra Nevada range by taking the cable car up the southern side of Veleta. The cable car runs out of the Pradollano ski village which sits at 2,000m above Granada Initially travelling in an enclosed gondola or cable car you arrive at the Borreguiles half way station where you change on to an open chair lift for the final stretch up to 2,9000m. The ride is spectacular in its own right as it carries you over the now dry ski runs. In the past couple of years the lifts have been adapted to accommodate mountain bikes and there are now a number of down hill runs also starting from the end of the chair lifts. The lifts end at a fairly bleak area on the mountain side however a couple of great walks start from here. Most walkers head north east to follow a track uphill to los posiciones de Veleta at 3,000m. From this spot you get one of the best views in the whole of the Sierra Nevada range as you look east across the dramatic north faces of Veleta, Mulhacen and Alcazaba. From here some more confident walkers may venture down into the corall de Veleta though most will continue south along the track to the refugio de carahuela before ascending to the summit. For those who don’t want to climb as much there is also another path which starts from the end of the chair lit. Head south west after leaving the cable car and the walking is equally spectacular if perhaps a little easier. After a few minutes waymarkers bring you to the head of a path which head down through quite rugged terrain to the Embalse de las Yeguas a small man made lake used to supply water for snow machines in the ski season. From here you can head south east to explore the lagunillas de la virgin, small natural tarns where you may well find snow till quite late in the season. Returning to the embalse you can retrace your path up hill or head north west to cross a small coll below the obvious observatory building to then head down to Borreguiles. Even in high summer it will be cooler at these altitudes so it’s worth remembering that you may well need additional clothing and a waterproof jacket. The cable cars do not run when there are high wind speeds and as ever when you are venturing out you need to check the weather forecast before you head out.
No comments: 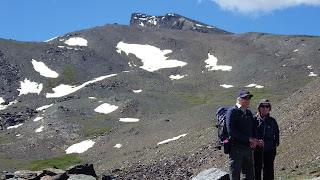 One of the problems I face with some clients is that I don’t really know their experience in the mountains. If they are here for a few days I do a walk on the first day that gives me some idea of what they can do and how fit they are or not. Clients who come for just one day, usually to do Mulhacen are more of a problem. With little idea of what experience people have it is a bit of a gamble. Once you get to meet people however you do get a chance to get some idea of what to expect. Most claim to have and a long experience of walking in Britain and a few well aimed questions soon confirm this. Others talk of trips to ‘’base camp’’, having done ‘’Kili’’( Kilimanjaro) or the Inca trail. In late June I had a group of three women who where here to do Mulhacen before they then headed off to Granada for a couple of days. We met in the hotel bar on the evening before and in order to get some idea of what to expect I asked about their mountaineering experience. ‘’We’ve done, Ben Nevis, Sca Fell Pike and Snowdon. Mulhacen’s not much higher than those is it?’’ I had a slight panic as I explained that whilst summits in the UK are measured in feet, Mulhacen’s height was shown in meters and as a result was more than three times the height. ‘’Will that make a big difference then?’’ was the response. We did set out the next day on the understanding that we would see how far we got. The summit was in view for most of the walk but we got nowhere near we did however have a great walk in the mountains which at the end of the day is what we went out for. I cant say to much as many years ago at a house show back in the UK I glanced at a map of Andalucia and saw a height of 3482 and presumed it was in feet and thought ‘’OK so these hills will be a bit like the Lakes’’ it was hours later dawned on me that as it was a European map it would be meters. At the other end of the client scale I have had had those who opening lines are ‘’I’m a triathlete and want to bag a few peaks’’ I then end up chasing people up and down the mountains without taking a breather. Not my idea of fun at all.
No comments:

The Mountain Camomile: Artemisia granatensis is found exclusively in the Sierra Nevada in dry grassland on loose rock over 2500m.  It has traditionally been sought after and used as a medicinal plant for stomach complaints, and its reputation was such that large amounts of money were paid to obtain its benefits. Over exploitation has brought this plant to the edge of extinction and there is now a programme within the National Park to increase its population.

Those once common, it now mainly occurs in the more inaccessible areas where the camomile pickers “manzanilleros” were not able to exploit it.

This week Mike and Jane from Sierra Nevada Guides decided to “have a look” for the plant using someone’s photo from the internet which gave a good idea of its general location.  Whilst descending from Veleta 3396m the 2nd highest summit in the Sierra Nevada they chose a route via the San Juan valley which would bring them under the old observatory. However not actually carrying a copy of the photo they failed miserably.

Sierra Nevada Guides are particularly interested in the areas wildlife and are keen to share our knowledge during the walks we lead.

Sierra Nevada Guides are always happy to help you plan your trip to the Sierra Nevada, even if you do not use a guide (though you will have an easier time if you do!).