Lucero and the Axarquia 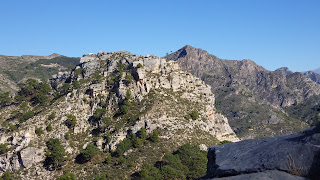 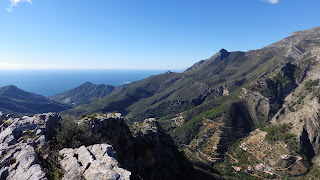 A couple of weeks ago I returned to the coastal mountains of the Axarquia to once again climb Lucero. This is a dramatic peak lying inland of Nerja , with a distinctive pyramid shape it sits proud on the skyline above the coast. Also known as the ‘’Raspones de Moriscos’’ the walk is one of the most breathtaking in the area and whilst not as high as some inland route has the feel of being on a much bigger mountain. The summit sits at 1,779m and offers some wonderful views both across the Mediterranean or inland to the distant Sierra Nevada. The rock in the area is limestone which creates its own distinctive karst landscape with pinnacle like summits with dramatic cliff faces and steep drops into the forested valleys below. The final section of the walk is along a waymarked trail from a forest track accessed from a forest track which comes through the resin forests south of Arenas del Ray. The path itself is well marked and takes you steeply through some weirdly shaped naturally eroded limestone outcrops and bypasses a number of lesser summits en route. Some of these offer what look to be great opportunities for exploration either as additional walking routes or for scrambles up good clean limestone. En route to the summit I did spy one such route and went ‘’off piste‘’ for a section to scramble to the rocky summit of Cerro de Venta Panaderos before the final steep plod up zig zags to the distinctive summit of Lucero itself. The summit is marked by a small ruin. Now only one section of wall remains of what was apparently a lookout for the Guardia Civil both during the civil war and later as the area was used by rebels still hiding from the authoraties. These mountain ranges as a whole are criss crossed with old drovers routes and mule tracks used to take livestock and good between the coastal areas and the inland towns and villages. There are two key points where these routes converged, the Puertas Frigliani and Competa. These low cols allowed slightly easier access through the range. Many of these routes had ‘’ventas’’ or bars along them to provide drinks for the men who walked or rode through the mountains. The ruins of these can often be seen particularly at key point on the walks such as the top of steep climbs or the junction of routes. This area is best walked in winter and spring as over summer the high temperatures mean that walking here can be dangerous or on occasion the park is shut due to high fire risk.
No comments:


Sierra Nevada Guides are pleased to announce that we have been accredited  to run a CPD event in the Sierra Nevada during 2016 which will provide 2 CPD events for those attending.


This will be a “showcase” event demonstrating the uniqueness and very best that the Sierra Nevada has to offer as well as climbing the four highest mountains including Mulhacen which at 3482m is the highest mountain in mainland Spain. The specific details of the event are:


Mulhacen at 3482m is the highest mountain in mainland Spain. Situated in Spain’s largest national park, The Sierra Nevada is surrounded by a natural park. Together they have some wonderful scenery, early summer flowers and fascinating geology. It was declared a Unesco Biosphere Reserve in 1986, in recognition of its exceptionally diverse plant, bird and animal species with over 100 endemic species.


In addition to the natural history of the area we will be aiming to ascend the four highest mountains in the Sierra Nevada: Mulhacen 3482m, Pico del Veleta 3394m, Alcazaba 3371m and Cerro de Los Machos 3329m.


The itinerary will include some easy scrambling and crossing a short exposed section of chain. Participants will need to bring suitable slings to safeguard themselves. Aspirants will be equipped and coached by the three qualified IML’s from Sierra Nevada Guides who will be leading this event. Four days in the mountains with three nights will be spent in mountain Refugio’s. The cost not including travel or accommodation is £200 per person.

Full details of the event are here.


Whilst this event is designed to provide CPD for IML’s it would also provide good experience for Aspirant IML’s and Mountain Leaders considering becoming IML's.

Learning Outcomes
To see how plants adapt to the varying climatic zones as we ascend into the mountains.

To observe the uniqueness of the flora and fauna of the area.

To observe the impact man has made through the ages within the National and Natural Park.

To learn how the National Park Authorities have acted to lessen the impact of man on the environment.

Understand the range of maps available for this area and the difficulties of navigation with maps of less reliability than O.S. maps.

The ''pitfalls'' of running a guiding company either from the UK or from abroad.

This course is being led by qualified International Mountain Leaders from Sierra Nevada Guides: Michael Hunt, Jane Livingstone and Martin Riley. Both Jane and Michael are members of BAIML whilst Martin is the first British member of AEGM, the Spanish Guides Association.