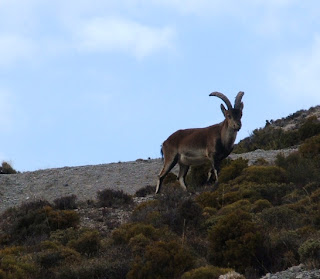 Last week I went with a few friends and again climbed Travenque a superb mountain east of Granada. After a steep ascent the final few meters offer a short scramble to a truly dramatic summit. The view east to Valetta, Caballo and the ski resort is one of the best in the range.

As often happens during a trip in these mountains during the walk we spotted a small herd of ‘’cabra de montana’’. Many of you will have seen herds of these ‘’mountain goats’’, normally running away into the distance. For those who haven’t these truly wild animals are about the size of a fallow deer, they are a tan colour with darker shoulders and haunches with the larger older animals having a pair large sweeping horns. Well suited to the mountain terrain where they are generally found they have short muscular legs and large soft hooves which are perfect for gripping steep rock faces. Generally browsers they live in areas of mixed scrub and broken ground in the lower mountains but I have seen them at 3,000m near the Caldera refuge on Mulhacen, on the edge of Lanjaron and also on the coast near Cerro Gordo. Often the only sign you have that they are in the area are large amounts of droppings on summits though you will often hear a sharp high pitched call as outlying individuals warn a larger group that you are approaching.

The groups you see will either be made up of females with their young or males. The two groups do not generally mix apart from the breeding season in autumn. This is also the time when males fight for dominance of a herd with head butting contests. 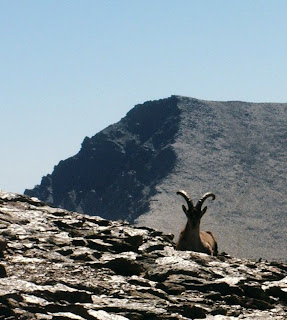 My first sighting of ‘’cabra’’ was about 10 years ago whilst descending the south ridge of Mulhacen. Needless to say seeing one of these animals for the first time was quite a shock particularly as it was quite a large male with a fantastic pair of horns. I have become accustomed to looking out for them but even so it’s often not until they move that I spot them as they are well camouflaged and blend into the backgrounds remarkably well.

Whilst often called mountain goats these animals are actually a type of Ibex, Capra pyrenacia . At one time there were a total of four subspecies. One, a Portugese subspecies, died out in 1892. Shockingly the other, Capra pyrenaica pyrenaica, became extinct on the 6th January 2000. A remarkably specific date. However this was when the last known specimen of a subspecies peculiar to the Pyrenees died. A frightening example of how easily we can loose unique animals. The two remaining subspecies however seem to be doing well and at the moment at least appear to be growing in numbers with an estimated population across the Iberian Peninsula of about 50,000.

Next time you’re out in the mountains take time out to try to spot these remarkable animals.